You get speed, flexibility and better control to produce vehicles faster with greater precision.

Industriel has a brilliant record in responding to complex customer requirements in everything.

Industriel is a pioneer in design-build specializing in architecture and construction services.

We work to reduce air emissions associated with our operations and the products we deliver.

Our team of professionals in the areas of architecture, engineering, management and construction bring you the insight and advice you need for your project.

On the global automotive industry

A Company involved in servicing, maintenance and repairs of engines, prime movers and exhaust gas turbochargers.

We are an integrated engineering company comprised of agile and experienced engineers skilled in different types of engineering work.

Join our award-winning team, and enjoy a creative, dynamic and inclusive culture focused on one goal – improving the world around us through imagination and innovation.

Work with
big and small

"Dealing with Industriel on a day-to-day basis has proved to be very easy. We make a telephone call, look at the options available, and then let them get on with the job while we concentrate on our business.

"Great job...thank you for getting this to us in an extremely short amount of time.hey also showed me ways to reduce costs in supply chain efficiencies. Industriel are always responsive and I know I can count on them to deliver.”

“We have a world-class supply chain that demands immediate response.Industriel came to us with creative, cost saving solutions related to inventory management. Last year we identified a 3% savings across one category.”

“It is a company we can count on. They are responsive, they bring new ideas and they care about the success of our organization. I’d recommend them to any athletic department.”

"They have great service, quality products and we trust them. We value a local relationship and the impact it has on our community." vamtam-theme-circle-post
 Category Climate Change
The Earth has warmed over a tenth of a degree since then; it is now approximately 1.1ºC (2ºF) hotter than it was in the second half of the 19th century.
 Tags Decarbonization, IPCC
Read More
 Category Energy, MW Scale

Vispiron Power Solutions and its local partner Maxsun have successfully installed and commissioned its first photovoltaic power plant in Iran.

Located in the Yazd province, the PV Plant was built on an area of seven hectares and generates an annual yield of 6.7 GWh of electricity. n cooperation with local project developer "Maxsun Dehshir Pisco", the 3.5 MW PV Plant was successfully commissioned after a construction period of merely a few weeks. The project is 100% financed by both Vispiron Power Solutions and Maxsun. For the successful realization of the project, the internationally experienced German EPC Vispiron worked with Maxsun EPC and several local Iranian companies.

Optimistic about further projects in Iran

"The realization of the project in Iran is considered as a milestone for the company and a demonstration of its impressive performance portfolio", says Florian Schönberger, Managing Director of Vispiron. "We remain optimistic that even after the US's withdrawal from the Iran nuclear agreement, the treaty with the EU will be maintained, enabling the successful implementation of follow-up projects in the Iranian region". Even under the political conditions prior to the US's decision, major challenges had to be faced. In particular the logistics and customs process had been a major challenging tasks.

However Schönberger praises the cooperation with the local authorities and partners in Iran. "The cooperation was extremely positive and very professional. There is a high degree of open-mindedness and trust towards the technology, as well as towards international business partners and investors." (HCN) 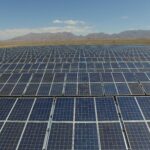